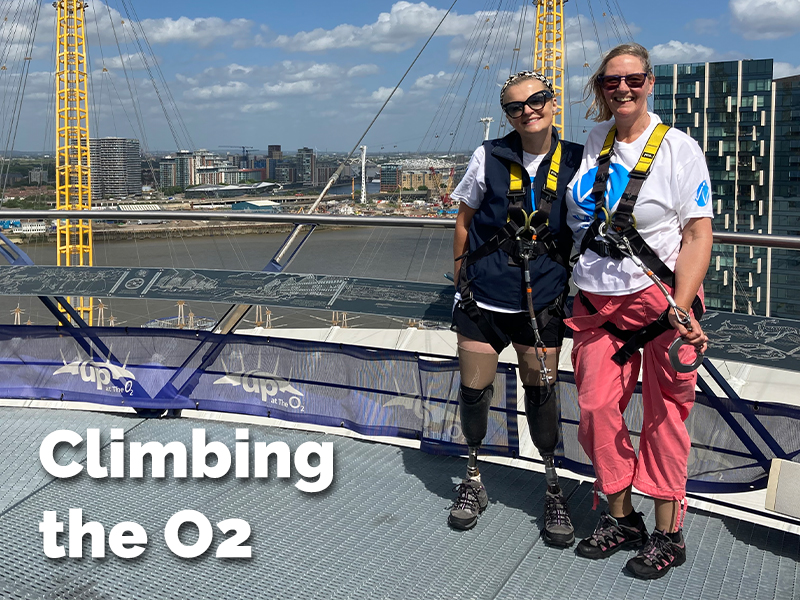 Volunteer Visitor Helen was born with bilateral fibula hemimelia – she is an above knee amputee on one side and also wears a below knee prosthetic on the other. This year, Helen took part in our O2 Summer Climb, and shares her story about her experience of one of our Life After Limb Loss events….

“I was born with bilateral fibula hemimelia which means without either fibula in my legs; I had my first amputation to take off my left foot at the age of 9. But I was wearing two prosthetic legs from age 2 when I started to learn to walk.

“I had a further amputation on my left leg at 21 when I made the decision to become an above-knee amputee which would give me the opportunity to learn to walk with a bending knee. Then, at the age of 40 I had revision surgery. It took 6 weeks to heal, and I found the recovery and refitting of a new socket the hardest part. It felt very difficult to walk again, but once I had my new socket it was very emotional. However, it was not long before I was mobile again.

“The last big change was being given an MPK knee. This meant learning to walk on my above-knee leg in a different way from before, trusting it to hold on slopes, steps, and uneven ground. It took me several months and more physio sessions at the limb centre. However, I am really pleased to have the MPK now as it has made walking with the above knee leg easier and less tiring.

“I became a member of the LA as soon as it started, and in 2021 decided to apply for the VV role. Given my experience as an amputee and having more time to commit to the training and role I felt it was something I would be able to do to help other amputees so that they could have more support than I did and know that they were not alone.

“I have enjoyed the interaction with fellow volunteers and felt more involved and part of the LA team. I feel valued, but I have also realised there’s a lot more support out there in the LA family for myself to benefit from.

“I’ve always enjoyed the LA’s life after limb loss events both online and in person, so this year decided to challenge myself with the O2 climb! I knew the climb would personally be a big physical challenge for me and I wasn’t sure if I would be able to do it but knowing that I had the support of other amputees made me feel that I could. I knew the buzz of achieving this as a group of like-minded people would be worth the effort.

“The week before the climb, I was very nervous, and was extra careful the week about overdoing it – I didn’t want to get a leg sore so that I had to pull out!

“I did worry though – I wasn’t sure how I was going to manage especially with the descent as I’m very nervous walking down slopes. I decided if I had to, I would come down on my bottom.

The camaraderie was fun

“The day of the climb arrived, and I felt excited to be part of the team event, the camaraderie was fun – we were all supporting each other and exchanging stories about our amputations and lives. It was great to see people in person who I had only talked to on Zoom before. I felt excited and had butterflies in my stomach and was keen to get started. I also felt proud of myself for getting this far and giving it a go.

“Every step was difficult on the first part of the very steep ascent with no ankles and only one knee doing all the leg work and without really being aware of it I was using both my arms to help pull myself up each step – they really ached the next day!

The achievement was the biggest thrill.

“On the top of the O2 at last it felt amazing! We were all congratulating each other on having gotten this far. The view was great too but that was just a bonus. The achievement was the biggest thrill.

“Coming down was harder. I knew it would be so I decided to come down backwards as I would on a ladder, one step at a time.  The descent was steep, but I did it and not on my bottom!

“After the climb, I felt euphoric! Not only for myself but for everyone else.

“I couldn’t quite believe I’d done it. I was so proud of myself. I know I could never have done it without such a supportive group. We had a lovely time celebrating with food and beverages afterwards, and it was wonderful to socialise with everyone who had finished the climb.

“If you’re thinking about taking part in the O2 climb, definitely do it! The challenge of achieving something you thought you wouldn’t be able to do is a reward in itself.  Getting out of your comfort zone is a great feeling – sometimes it is worth going out on a limb ☺”