The Limbless Association is both inspired and incredibly grateful for all our fundraiser’s efforts.

Below are just some of our LA Fundraising Champions. 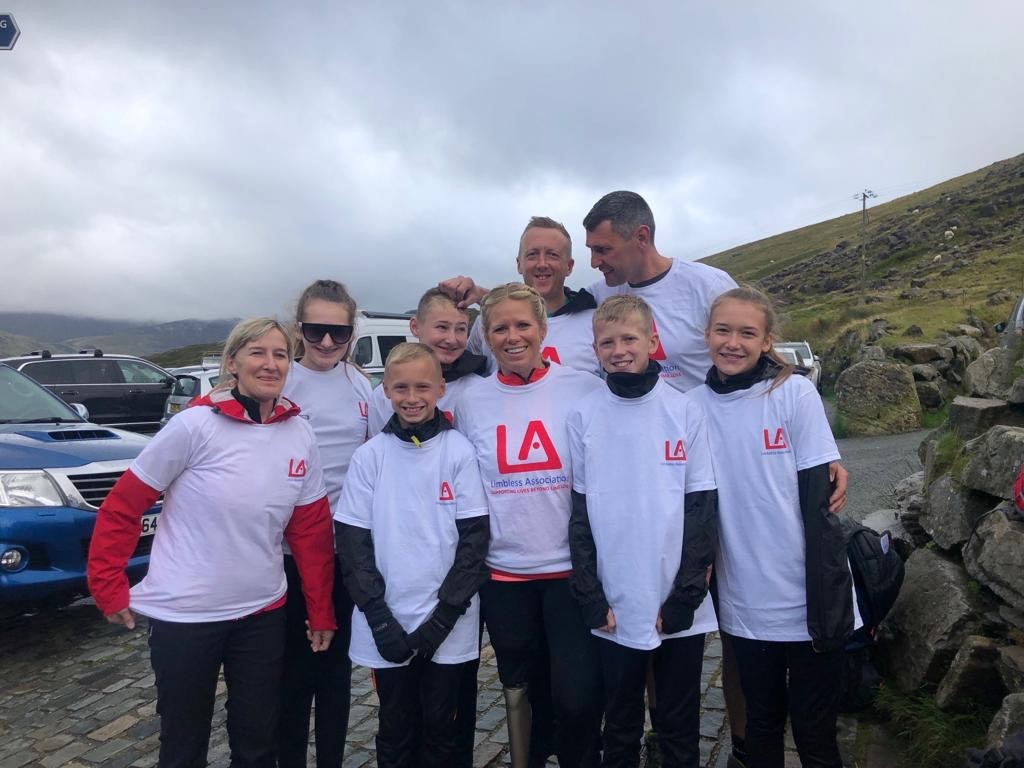 “I’m so proud of myself and my team!”

It seemed like one minute I was chatting in my kitchen with friends about doing a charity walk – the next minute I was actually climbing Snowdon to raise money for the Limbless Association! The weekend was great – although, I have to admit, it wasn’t so great waking up to the horrendous winds and rain at 7am.

There were questions if we were going to be able to do it. I panicked for a moment as so many people were relying on me and I didn’t want to let my sponsors down.

But we held out and by our 10am set-off it was perfect weather.

We took the Miners’ Track going up as I wanted a bit of a challenge and I knew my leg would work better climbing. It took us three-and-a-half hours to get to the top – which I’m told is a brilliant time. It was certainly a challenge – there were some hairy, scary moments!

Once at the top we took photos and ate lunch, then made our way back down via the Llanberis path, which is believed to be the easiest track. However, the descent took its toll on my good leg, and it took me three hours to get back down. The pain coming down was uncomfortable – but what goes up must come down and, through gritted teeth, I made it.

Celebrating success I had the most incredible support from my sons, my husband and friends who all helped me throughout the day. Once we had got back down I was in a total bubble of disbelief, and so proud of myself and my team! I sat and enjoyed a bottle of Budweiser (which I don’t normally drink, but it helped!). 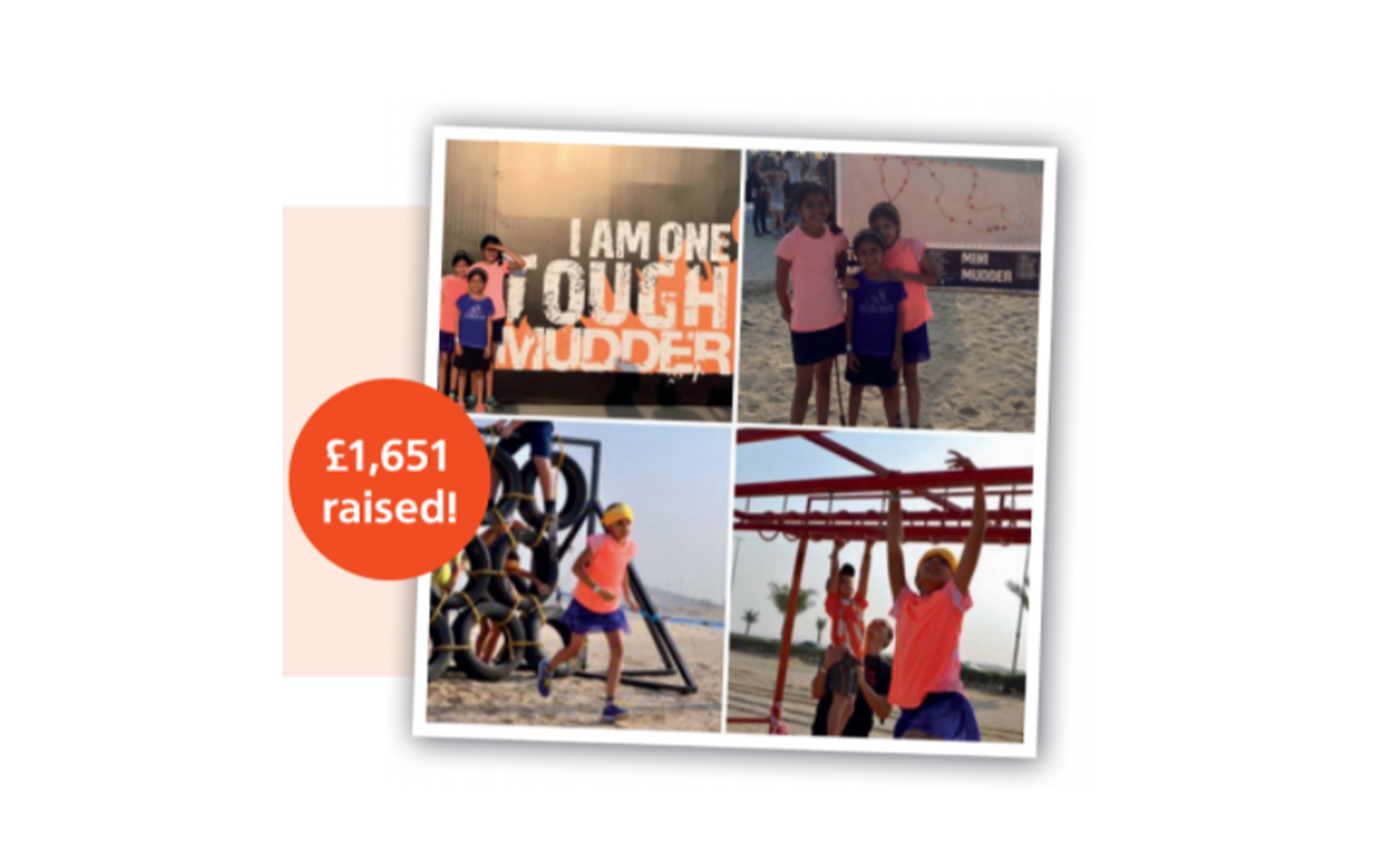 Fundraising superstar sisters Simrah, Jennah and Fatima Adam raised an incredible £1,651 for the Limbless Association. The trio completed a Mini Mudder challenge, an obstacle adventure course for kids, in October last year. They say: “We chose the LA because our uncle lost his leg in an accident almost two years ago and they are the main charity which has supported him and continues to do so. We are taking part in Tough Mudder because our uncle has done it in the past.” A massive well done and thank you to the girls!”. 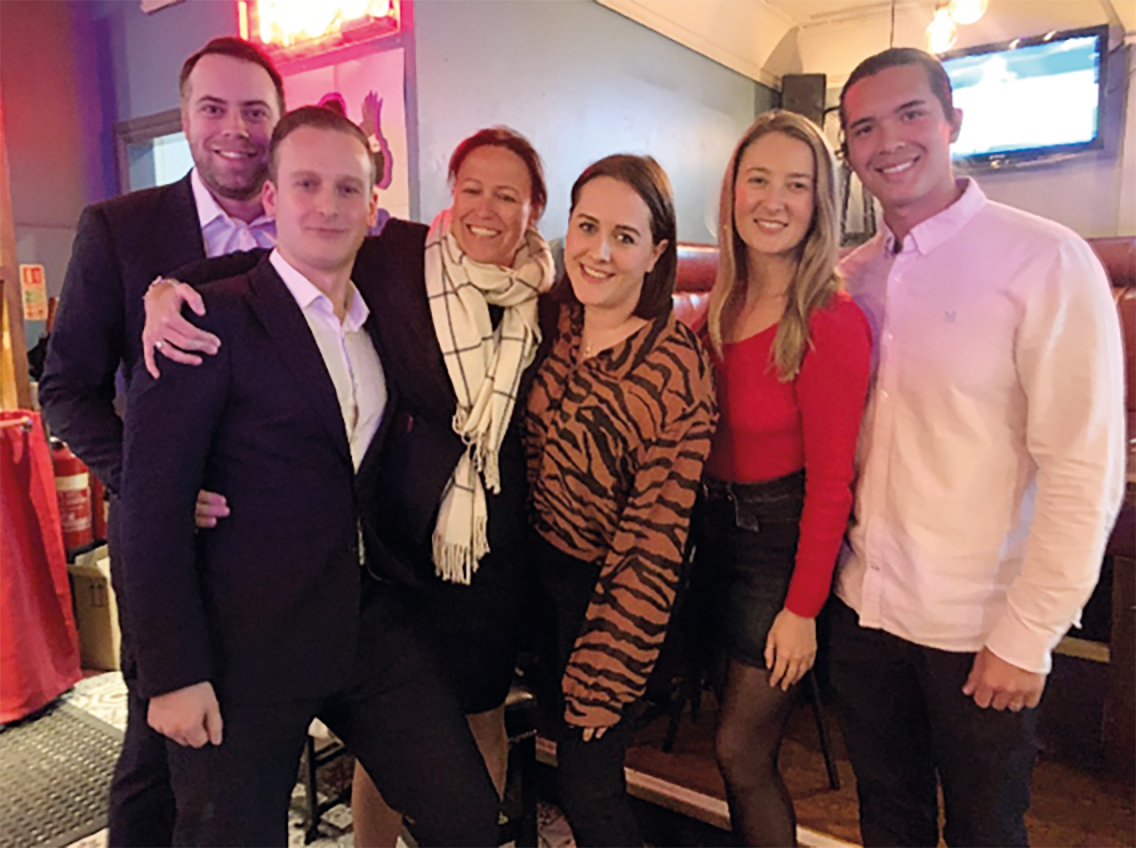 On the 10 March 2020, Bolt Burdon Kemp held a quiz night for the LA – and what a fabulous, fun-filled night it was! Taking part were 13 teams, with two teams from the LA, including Debbie Bent, the charity’s CEO, Martin Nsiah, Finance Officer, David Rose, Chair, and Ella Dove, Young Ambassador Lead.

Bolt Burdon Kemp and the LA are immensely grateful that so many people took part and donated so generously on the evening. An incredible £1,000 was raised! Ben Pepper, Associate Solicitor at Bolt

Burdon Kemp, was the quizmaster and certainly put everyone through their paces – from sport to music, to general knowledge – ensuring that, by the end of the evening, everyone departed more enlightened than when they arrived! 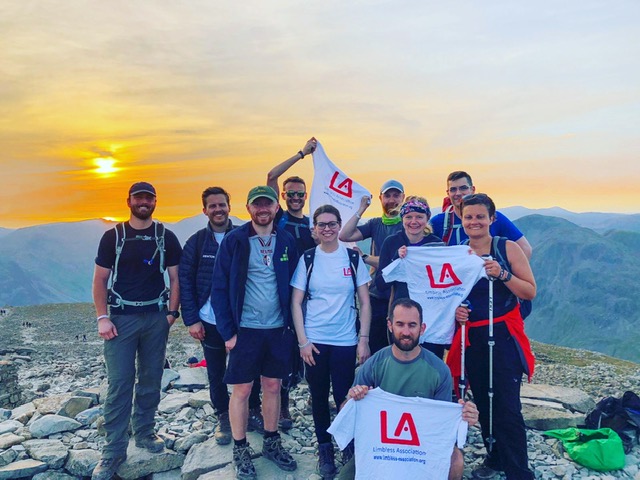 Our trip started on Friday 21 June at 10am with a nine hour minibus ride from Milton Keynes to Fort William and a night at the youth hostel. We began our 24 hours at 7.20am on Saturday with good weather for the summit of Ben Nevis, and we managed the ascent in good time. Unfortunately, bad weather then set in, leaving us in the rain and wind without a view. But our spirits still high, we put on our LA T-shirts for a picture at the top.

The descent from Ben Nevis was slow owing to foot traffic on the mountain, and we fell a little behind schedule. Once completed, it was straight back into the bus for the long haul down to Scafell Pike. Unfortunately, we ran into road traffic, putting us behind a little further. This climb began at 6.30pm in fantastic sunshine and about 22˚C. It was a hard climb, but we managed the ascent in two hours with fantastic views of the sunset over the lakes and out to the coast. Scafell’s descent took its toll on the team and lead to one injury, making our climb down slower than planned.

We reached the bottom at 10.30pm, just as darkness set in. While waiting for our injured member, the rest of us had fun trying to de-kit and we managed a meal as fast as we could by torchlight before getting back on the road and heading towards Snowdon. After an uncomfortable and partial sleep for most of us during the night drive, we arrived at Snowdon at around 4.30am and went straight into the final climb, minus the injured member of the team. We began just as the sun came up, so made the ascent without torches; however, it was cloudy and quite windy at the top.

The climb was deceptively easy to begin with, following the Miners’ Track. However, the ascent suddenly got very steep about a third of the way into the climb. We pulled together and managed the final summit by 7am, within our planned 24 hours. However, the clock would not stop until we reached the bottom, so after a mad scramble back down we completed the challenge around 8.50am, making our total time 25 hours and 56 minutes. It was a great effort by our team! Our guides told us that, had it not been for unfortunate traffic and the injury, he was sure we’d have come in under the 24 hours. 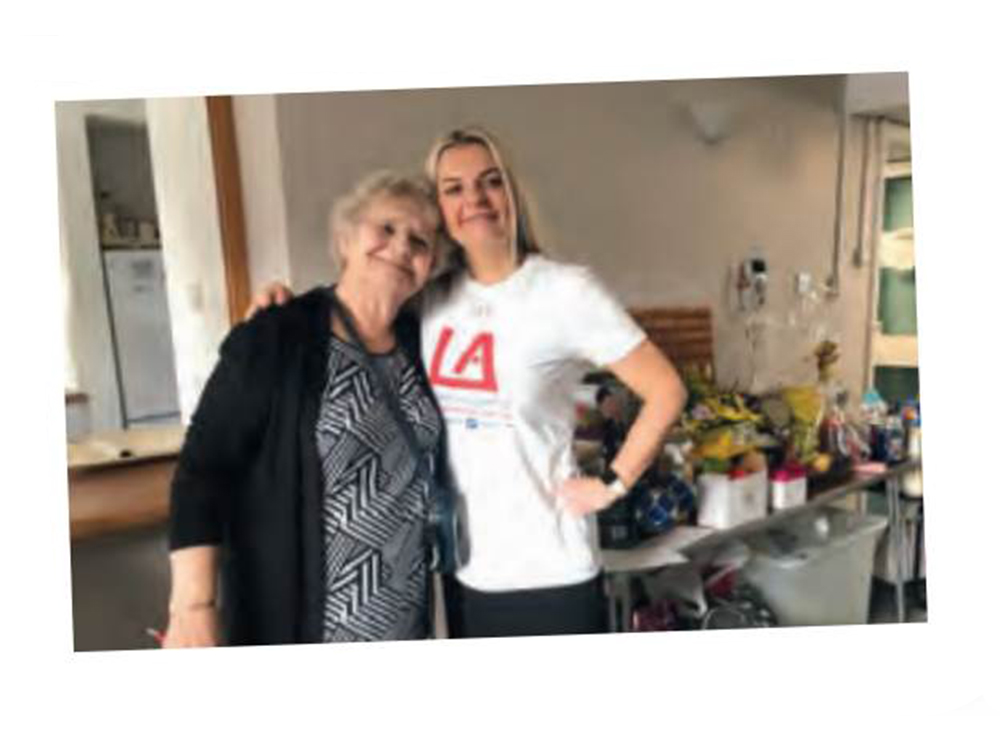 Thank you to Pat (pictured with LA ambassador Tracey Ralph) and her friends at Chignal House, Essex, who ran a fundraising coffee morning in their sheltered home and raised £437 for the LA! 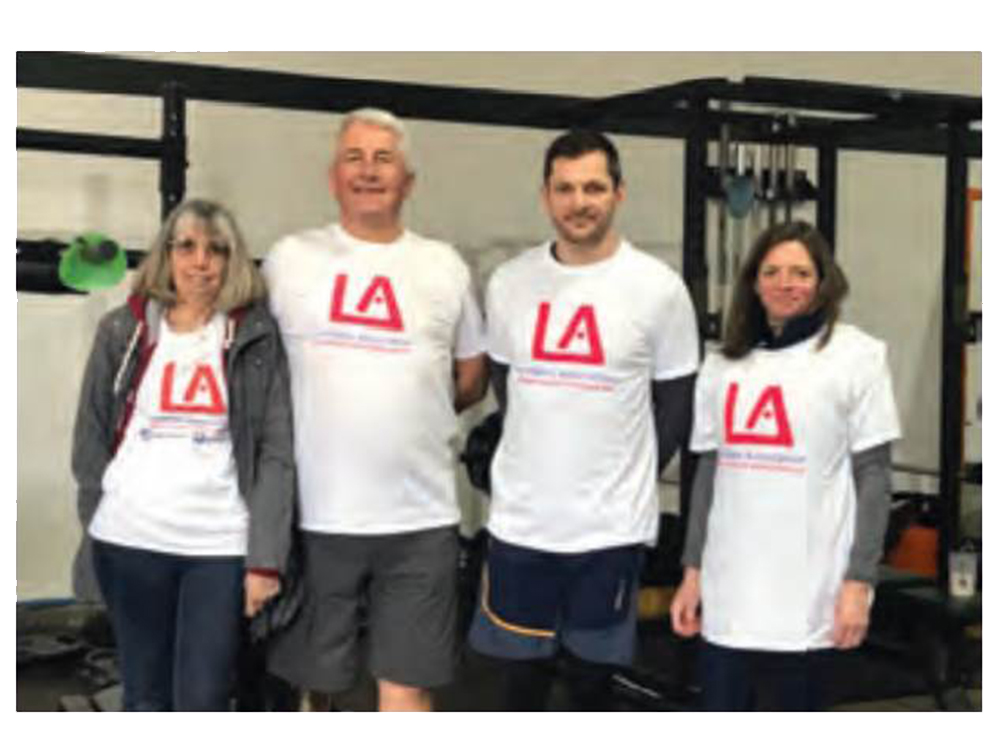 Raised: over £3,000 for the LA and Barnardo’s Following a team vote, Ortho Consulting Group are pleased to share that the charity they will be supporting in 2019 is the Limbless Association.

“We are committed to help make a positive difference where we can,” said Matt Woods, the company’s founder. Andrew Dubowski, head of international business, kicked off their first fundraiser with a huge personal challenge. He travelled 3,000 metres by conducting a full-body, flat-to-the-floor burpee, followed by a one-metre jump.

LA Chair David Rose and his wife Susan were on hand to cheer him on and what an amazing physical challenge it was – completed in four hours and 13 minutes. Well done from all at the LA! Ortho Consulting Group are planning a second charity fundraiser for later in the year with a London-to Paris cycle challenge.