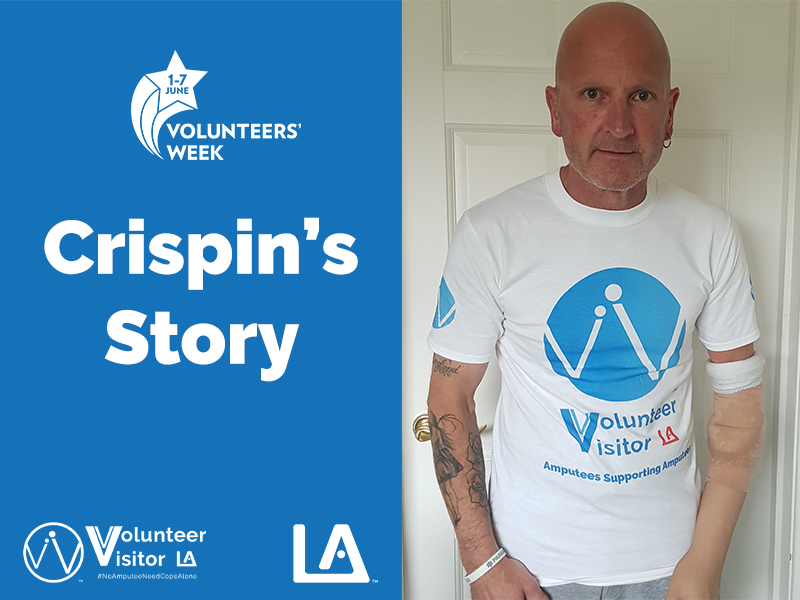 Crispin was 18 when he lost his hand in a factory accident. He didn’t know any other amputees and it was only in 2021 while training to become a Volunteer Visitor that he spoke to another amputee for the first time…

“I lost my left hand in 1989 in a factory accident. The amputation was very severe, so severe that the surgeon could not reattach the hand. It was all very traumatic. I became very reclusive as I was embarrassed by the fact I no longer had a hand.  I was 18 and I was embarrassed to have a prosthetic at that age. I would hide my prosthetic by wearing long-sleeved tops in the summer so that people couldn’t see. I kept living life as I had before, I was trying to be fearless. But I adapted – I learnt to drive, I carried on playing football and I continued to work in manual labour. In 2021 I saw a leaflet about the Volunteer Visitor programme in the limb centre at Middlesbrough.  It sounded interesting and I wanted to give something back and give others the help and support that I didn’t get.

The thing I most enjoyed about the VV training was meeting other amputees. It was actually the first time I had talked to another person with an amputation, 30 years after my amputation.  The training was intense and gave me lots of information. It covered more than I expected. It was a bit overwhelming to be honest but when I actually spoke to an amputee it wasn’t as nerve-wracking as I expected and it went really well.

Peer support is important because it gives the amputee more confidence that there is life out there with an amputation. When I was discharged from hospital I had no support and speaking to someone would have been so helpful. I have spoken to four different people so far as a VV. The best part of volunteering has been talking to new amputees and sharing my story to give them inspiration. If I can do it, they can.

Being a VV has given me more confidence and by speaking to other amputees I know that there are other people out there like myself. To anyone thinking about becoming a VV I say do it, it is very rewarding!”