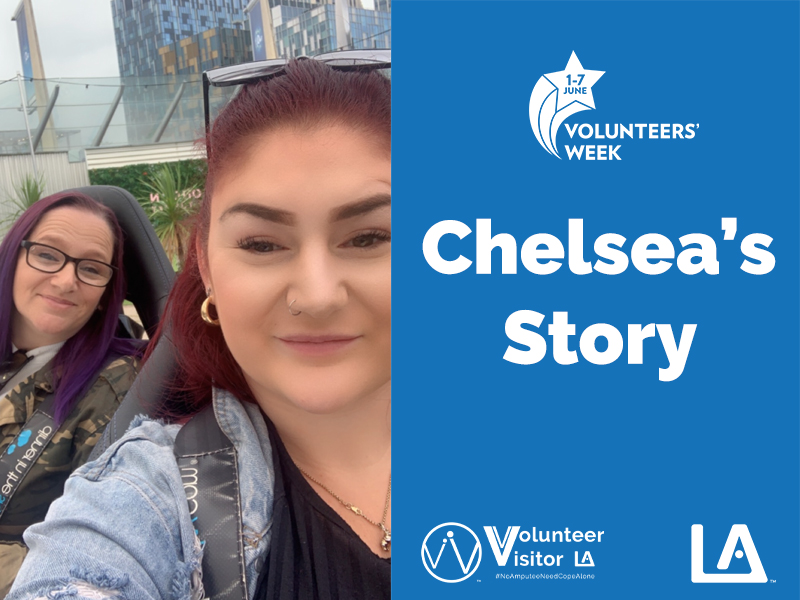 Chelsea was a busy and fun-loving twenty-something when she was involved in an accident whilst on holiday. Here, she shares her story of becoming an upper limb amputee, and how the Volunteer Visitor role has enhanced her new life…

‘I was 26, in a job I loved, with a busy social life and on the dating scene. I was in such a great place with a 10-year plan in place and I’d just booked a dream holiday overseas. I had no idea that this decision would change my life forever.

Whilst on a safari excursion in the jungle, the jeep we were travelling in overturned, fell on me and caused a traumatic amputation of my arm above the elbow. Suddenly, it was a race to get out of the sticks and into civilisation, and I was kept alive by adrenalin and luck – I died seven times during surgery, and although they saved my life, they were unable to save my limb. In a single day, I had gone from one life to another – I was a new amputee and had no idea what to expect.

I was kept alive by adrenalin and luck

My mum had flown over to be with me, and after I was stabilised, we both made the trip back to the UK, where I was immediately taken to hospital. But I was released quite soon and didn’t get referred to orthopaedics for several weeks. During this time, I tried to adapt to life as an amputee, but entered a dark and difficult place. I didn’t know any other amputees, and at the time I had no idea about the LA and the VV programme.

After a while, my OT encouraged me to support them with newer amputees, and I finally met others in the same boat. However, I still could not see how I would ever feel positive about life again – I was off work for 6 months, isolated and alone. I became very depressed. Where did I go from here? I had no idea.

One day, during mirror therapy, my OT told me about the LA and VV programme, and I found their website and signed up for membership. After that, I applied for the VV role; it was now 2 years since my amputation, and I felt ready to support others. I’ve always liked helping people and giving back and thought about how I wish I’d known about the service in those important early days.

I felt ready to support others

I got accepted for the role and went on the induction training, and really enjoyed meeting other amputees and learning from everyone. I have been volunteering for 8 months now and love it! I really enjoy supporting service users with their questions and challenges – I’ve seen people progress and it’s really rewarding.

I’m finally back in the great place I was before my accident – things might be different, but they are on track. I’m in a new job, studying for a degree, have a great group of friends, and am back on the dating scene! Not only that, but I’ve taken up a new hobby – pole dancing! This really helps me keep fit and healthy, and I’m competing in the sport this July.

Things might be different, but they are on track

If you’re considering applying to become a VV, do it! I’ve learnt so much about myself. When you’re telling people it’s going to be ok, you’re also telling yourself. It’s helped me become more accepting of my situation. I’ve come to terms with my own limb loss a lot more. The sense of achievement and happiness I feel is immense.