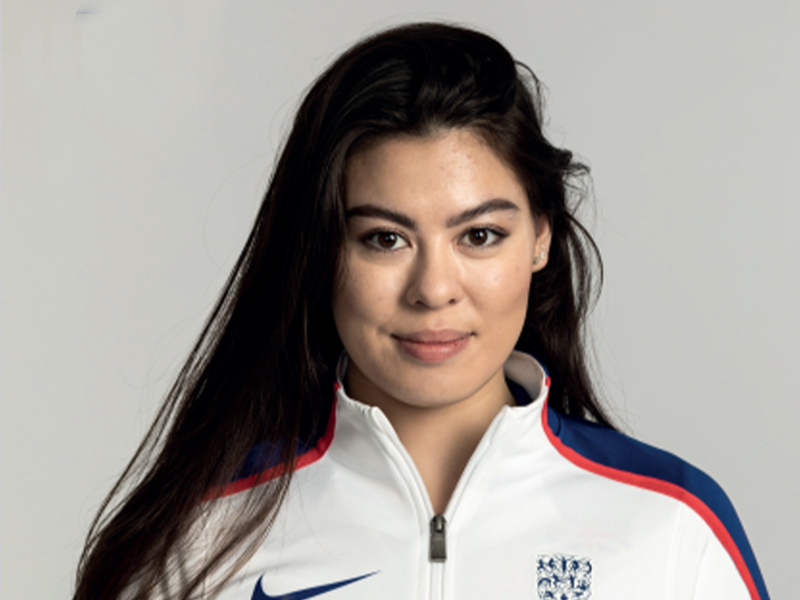 With the Japan 2020 Games postponed, sprinter Julie Rogers’ Paralympic dreams are on hold until next year. She explains how she’s remaining positive and determined to succeed.

I was born with a congenital condition which meant that the tibia and fibula bones in my right leg didn’t form properly, so it had to be amputated when I was two years old.

As a kid, I wasn’t aware of being different to others. I have a twin brother and we were both sporty. My dad encouraged us to be active as he owns a martial arts gym.

I was a confident little girl, very outgoing. It wasn’t until I was about six that I realised that I was different. Kids can be mean and I was an easy target for bullying. I isolated myself and stopped doing sport. From the age of six to eight, I struggled socially at school. Instead, I knuckled down academically.

By the end of middle school, I was unfit. My brother, who is very sporty, encouraged me to do something about it. It was 2008 and, although disability sport wasn’t as big as it is now, I remember watching the Paralympics and thinking, “Oh, there’s someone who looks like me.” I was inspired

At the time we lived in Bedford, near to the Stoke Mandeville Stadium, so I went along to see what was on offer. At first, I tried wheelchair basketball, but I’m not a regular wheelchair user and it was very violent so it wasn’t for me.

I tried sitting volleyball and just loved it. It helped me to come out of my shell and I gained physical confidence too. I was spending time with other people who looked like me.

Sport helped me to find a way back socially. I started coming into my own at the age of 10. I moved schools and just went from strength to strength. I started to train in sitting volleyball at Roehampton University and was invited to go to the championships in Cairo in 2011.

Then the team got a wildcard entry into the London 2012 Paralympic Games. I was the youngest on the team by far and I had to grow up quickly. The team looked after me but still had to earn my spot and prove my worth. It was a turning point for me and it really fed my hunger.

In 2013 I switched sports to sprinting. Everything in my life up until then had been about volleyball and I just got bored of it. When I was training in London another athlete said to me that I should try running as I’m strong. I didn’t even think I could walk well in a straight line so I’d never considered it before!

I normally used a mechanical knee, but Ottobock gave me a blade to try out. A blade is so different to a mechanical knee, but I adapted very well. A lot of it is about trusting the blade because it feels so alien. You’ve got to force through it. I just went for it! I’d also built up core stability from sitting volleyball.

I got a place at the 2016 Paralympics in Rio as a sprinter. Being older, I was more aware of the pressure and I didn’t do as well as I could have.

But the London 2017 World Para Athletic Championships were brilliant for me. We were back in the UK. My race was two behind Jonnie Peacock’s and I ran in front of 35,000 people. I did well in the event and there was such a positive atmosphere.

I chose to study economics at Cardiff University because the city has such a fantastic indoor athletics centre. I’ve been training there for the past three years and am now about to do my finals at uni. I struggled with injuries but have moved my life around so I could aim for the 2020 Paralympics.

I had a job role in finance lined up to start after the Japan 2020 Paralympics. Now, these have been postponed till next year, I’ve had a lot of thinking to do. But I’d made all these big changes to my life and I don’t want them to go to waste. After all that blood, sweat and tears I can’t give up. I’ve decided to commit to training for the rescheduled games. I’ll have to reshuffle things around in terms of employment.

There’s been a mixed response to the postponement – Paralympians are very versatile and we’re used to adapting. Some athletes are looking at it as a chance to extend training. But some people’s disabilities won’t let them train next year, for example, some had operations planned for after the 2020 Paralympics.

I’m taking it positively, although it has been hard not to train at the track as I’m used to being there all the time. I’ve got dumbbells and an electric bike in my living room, which I luckily bought just before lockdown when a neighbour was selling it. And, of course, I’ve been going out for the daily allowance of exercise.

As I’m coming up to my finals exams, I’ve been flooded with uni work. But I’m used to combining training with big sporting events. I was doing my A levels during the Championships in 2017, so I’m taking it in my stride. I’ve always balanced education and sport.

To be a champion sprinter you need commitment to a goal – and to want to translate that into something shiny! You need a purpose behind that goal, which will give you the focus to keep going on the days you don’t want to train. You also have to make sure you have the right set up, support and the right environment outside of your training. There’s a massive psychological element to it.